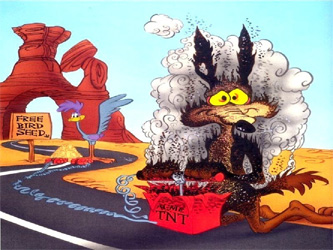 of Wily E. Coyote to blow up the Roadrunner. This was one of my favorite cartoons as a child, and I still like it today. After all these years, it makes me laugh. In addition to its comic value, though, I think that it demonstrates some valuable points about the destructive side of anger. If we make destructive anger explicit, it could help us to understand our own anger or potential for anger. It might even permit us to harness its force as an agent for good in our lives. Here are some ideas about destructive anger as illustrated by Wily Coyote:

Destructive anger is irrational and unproductive.
Most coyotes hunt their prey in order to eat it. Should Wily Coyote ever succeed in his attempts to bomb or crush the roadrunner, there would be nothing left to eat. He has clearly not thought this through. Yes, yes… you will tell me that he is only a coyote. If you think that irrational anger is solely a coyote attribute, read the newspapers.

Most “motives” for crimes of rage are cloudy at best. We saw this in Norman, Oklahoma, on 9/11, and on numerous other occasions when criminals thinking to harm the “United States” destroyed, instead, a wide variety of their fellow human beings – people from their own country with beliefs similar to their own, children, tourists, mothers, diplomats, peace activists, war mongers, equal rights advocates, embezzlers, grandfathers, and other random strangers. Did they harm the “United States”. No. They just fanned the flames of their own anger – and everybody else’s.

Destructive anger is dangerous, and it usually hurts the bearer more than it does the target.
Someone is always harmed by Wily Coyote’s anger. It is, without exception, him… but his anger also (theoretically) endangers both the Roadrunner and the pristine desert landscape that, by the end of each episode, has been leveled by the coyote’s inept and impulsive overuse of ACME’s bombs and TNT.

Destructive anger is ineffectual.
Destructive anger does not accomplish much. It keeps us off balance and subverts our truest power, the power of the spiritually centered self. Wily Coyote is unmindful and uncentered. His thoughts are off in the distance, wherever the Roadrunner is – something he does not know but only imagines. It never occurs to him that he is on the verge of blowing himself up because his focus is displaced. He is an incompetent hunter, and his failure is more attributable to his own anger than to the Roadrunner’s unique talent and lightening speed.

When I discuss anger with my Clients, I talk about three kinds of anger.

Wily Coyote is prey to anger directed outward. This is the kind of anger that is recognizable to most people. Anger directed outward is manifested by physical or psychological violence toward someone else. This is the type of anger that is often on the news. A perpetrator goes into a theater and shoots 30 strangers. A jilted lover stalks and murders her ex-boyfriend. Someone opens fire on a classroom of small children. Teens bully an “outsider”. Why are they so angry? we ask. People are sent to Anger Management for this kind of anger.

Anger directed inward is entirely different in its manifestations. It is anger directed toward the self. Courts do not mandate its treatment. Symptoms may include suicide attempts, cutting or other forms of physical self-abuse, an addiction, an eating disorder, and/or a passive refusal to engage in healthy and joyous processes. It is harder to spot and harder to treat this kind of anger because it is not overt. The person who has this kind of anger has to admit, first, that he or she is angry and why. They may not be willing to admit that – even to themselves.

There is, however, a positive kind of anger. It is healthful anger. Healthful anger can best be understood in this statement:

The best revenge is getting well and moving on.

Healthful anger means reclaiming oneself from imprisonment by negative factors. These could be:

Healthful anger can coexist with the understanding that each person’s life is a journey, a sacred journey, that is particular to the self and to no one else. Nothing must interfere with our journey. Healthful anger may be a key to personal growth and healing when we use it to galvanize ourselves, surmount obstacles, break the chains that bind us, and go on our way.

The Story of Jonah
One day in group, 23-year-old Jonah told us about his stepfather’s consistent unkindness toward him. Constant criticism, verbal abuse, incessant put-downs, and ridicule had accompanied every action undertaken by the developing boy. As angry as Jonah was, he had used his anger to push ahead on the soccer field and in the classroom. “Every A I made was a nail in his coffin,” he told us, “and the happiest day of my life was when I handed him my acceptance letter from Harvard.”

The trouble was that Jonah was still angry. He had put his anger to good use, and now it was time to “get well and move on”. He wrote a therapeutic “letter” to his stepfather. He read it to his group. They commented and asked questions. Later, he wrote another version of the letter as he continued to process his resentment. Still later, finally, he mailed the letter with the understanding that he was prepared to move on. Among the things that Jonah wrote in the final version of his letter was, I am releasing you from my thoughts and from my mind. I know I have to do this unless I want to use you to make a prisoner of myself.

If you have anger issues that you have not dealt with, please come and see us. Don’t let your anger cast a shadow over your own life or cause you to harm others. Anger is almost always treatable when the Client is willing. The day that Jonah left group for the last time, he was smiling because he knew that he had put his anger to good use and could now leave it behind.