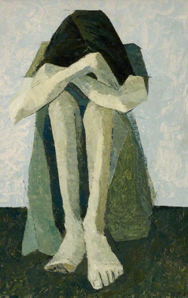 Myths of Creativity: Art History, English Lit, Introduction to Classical Dance, and Music Appreciation
In many academic courses – especially those taught in this country and in this century – the professors would have us believe that painters paint in order to entertain and instruct us, to document a time and place, to distinguish themselves, or (best case scenario) to sell their paintings for $250 million, which was the going price for Paul Cézanne”s The Card Players in 2011. Similarly, teachers and critics of literature appear preoccupied with anecdote, form, technique, and other externals. Music and dance theorists invariably praise composers, performers, and choreographers for the “beauty”, “interest”, or “relevancy” of their efforts.

I admit that, as a therapist, I may view the arts differently than some other people do. It may be, in fact, that the reason that I am a therapist is because I was, first, a pianist and dancer and a student of art history and literature. All of those experiences may, in fact, account for the fact that, while others may be interested in what and how people produce art, I am more interested in why.

Bedlam
I have an idea that the purpose of art is often to express something that must be expressed. In other words, I believe that some people paint and write and perform and compose because they have to. In the image above, Marion Patrick”s Depression II evokes the despair of manic-depressive (Bipolar) illness. Do you think that it is an exercise in composition? I don”t. I think her sadness could not be contained… that she had to paint it or die. She was quoted as saying that her work was an attempt to communicate “beyond the isolation of the individual” which she felt to be “inevitable”. She was trying desperately hard to push past the isolation of the mentally ill. I wish that I had been able to talk to her about it. I”m not saying I could have helped. I”m only saying that I would have liked to speak with her. That”s all.

Patrick”s self-portrait hangs in one of the most famous mental hospitals in the world. Founded in 1247 in the United Kingdom, Bethlehem Royal Hospital was the original Bedlam whose name is now synonymous with chaos or madness. Bethlehem Royal began treating the mentally ill in the 1400s. In 1830, the hospital began collecting the art works of its patients. Marion Patrick was one of them. You can see her works and those of other patients on the hospital”s website. I find them extraordinary.

Touched With Fire: The Artistic Temperament
Kay Redfield Jamison wrote an unusual book on the type of temperament that may lie at the very foundation of extraordinary artistic endeavor. The more extreme the temperament, she makes us believe, the more unique and striking the art.

Touched With Fire: Manic-Depressive Illness and the Artistic Temperament is Jamison”s convincing attempt to correlate extreme moods with the creation of remarkable painting, literature, and music. There is little talk of “talent” here. There is no analysis of theme, color, structure, or technique – only an almost unbearably long compendium of gifted, moody, and sometimes dangerously moody artists, writers and musicians. From Artaud to Walt Whitman, Strindberg to Van Gogh, Jamison makes it sound probable that great art is not formed by “normal” cognition and superficial emotion. Does that sound obvious? I think it does, but on the other hand… does it really? Are there exceptions?

Trashed
Jackson Pollock suffered from chronic alcoholism and the depression that often accompanies it. My personal feeling when I see his works is that his painting might have grown out of anger towards himself, sorrow for those who loved him, and

hopelessness about any possibility of finding a way out as he splattered house paint, sand, cigarette butts?, trash, and other foreign materials onto the canvasses laid before him on the ground.

At the height of his fame, he changed techniques and began painting in darker and darker colors – at least for a while. He stopped naming his works and, instead, numbered them. Was he growing more and more abstract in order to harness the energy of his despair without actually feeling it again and again? Well, if he was, it probably didn”t work because, even today, when I see Mural, I feel, again, imprisoned by alcohol. It brings tears to my eyes.

Jackson Pollock died in 1956 at the age of 44 in an alcohol-related, single-car crash that some people called a suicide. At that time, many art theorists and critics were calling him the greatest painter this country had ever produced. Whatever…

Making Art, Using Art
If you are an artist, musician, choreographer, performer, or writer, you might think about the relationship between your creative expression and what you are feeling as you create. Have you ever consciously painted, written, danced, or played your thoughts and moods? If you haven”t, think about doing it. It is very therapeutic. Feelings must be expressed. Here is a story about that.

Graffiti
In the early 1970s, I ran into the bathroom in a café in the section of Paris called Le Marais. I was young and always in a hurry and I went running in, abruptly pushing open the old, hinged door. A woman, in her thirties perhaps, was writing on the wall. When I burst into the room, she stopped, embarrassed, her pen still posed on the lacy black heart she was drawing on the old plaster. She said to me, “I”m sorry, but I have to do this. It”s something I can”t tell anyone, so I have to write it.” She finished the heart and wrote the initials E. & J.- L. in its center.

I asked, “Why can”t you tell anyone?” She explained that the man and woman with whom she was having dinner were old friends and that she was in love with him and always had been. “No one must ever know,” she said, “So I have to write it.”

I understood exactly what she meant. Do you? That”s why I think art happens. Not just for this French graffiti artist and for Marion Patrick but for all of us. We simply have to express whatever lies within us. As the psychoanalysts constantly remind us, it”s going to come out one way or another.