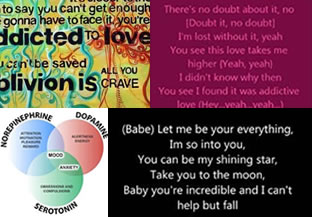 Rock
A lot of you are probably too young to remember Robert Palmer’s 1986 mega-hit about the effects that passionate love has on human beings. Entitled Addicted to Love, it contains this description of the person who is passionately in love:

Your lights are on, but you’re not home
Your mind is not your own
Your heart sweats, your body shakes
Another kiss is what it takes
You can’t sleep, you can’t eat
There’s no doubt, you’re in deep
Your throat is tight, you can’t breathe
Another kiss is all you need
…
You like to think that you’re immune to the stuff…oh yeah
It’s closer to the truth to say you can’t get enough
You know you’re gonna have to face it
You’re addicted to love

You see the signs, but you can’t read
You’re runnin’ at a different speed
You heart beats in double time
Another kiss and you’ll be mine, a one track mind
You can’t be saved
Oblivion is all you crave
If there’s some left for you
You don’t mind if you do…

Shakespearean Symptoms
Indeed, people in love and those who have an addiction to alcohol or drugs (or other things as well) frequently share a syndrome that can include these symptoms: distraction and the inability to focus, sweating and shaking, sleep and appetite disturbance, irregular breathing, a loss of interest in what used to be interesting, ‘missing the beat’ in activities at which one was once competent, and an all-consuming need for the substance or the object of the obsession that eclipses everything else. Their lights are on, but no one’s home. They are in dreamland, a world of their own making. They live in fantasy, fixated on the Object of Desire.

In A Midsummer Night’s Dream, Shakespeare portrayed four “human” characters in uncertain states of mind wandering in a dark forest at night. This is a metaphor for the delusional state of desire. Spells are cast. A fairy’s magic potion is consumed. Baffled partners are misled and misleading. Above all, logic is misplaced as they try in vain to separate truth from fantasy. Existing simultaneously in the forest and in Fairyland, they share, at one time or another, the symptoms that you might expect from those who have allowed alcohol or drugs or magic potions or love to get the upper hand.

It may be worth noting that being in love and abusing substances both produce, at least for a time, emotions that are uncontrollable: power, euphoria, reckless abandon, and then… ???

Broken Hearts
Early in my career as a therapist, I had a Client whom I tried desperately to help. I was working at Emory University on a research project, sponsored by the American Heart Association, which sought to examine the effects of 12 sessions of Cognitive Behavioral Therapy (CBT) on post-operative cardiac patients who had experienced heart failure.

Among other things, CBT seeks to reveal and to alter the negative thoughts that may be affecting a Client’s mental and physical health. All of my Clients had hearts that were, both literally and figuratively, broken.

Too Late
One of my Clients was a kind and very depressed woman whose life had been unquestionably difficult. Depression was widespread in her family, and her daughter had twice tried to commit suicide by hanging herself from pipes in the basement of their home. Twice my Client had arrived in the nick of time and cut her daughter down from the pipes in time to save her life. The third time, my Client was not successful.

Two Addictions
During one of our sessions, we were talking about the difficulties encountered by most people when they try to change highly patterned negative thoughts. My Client, a Catholic, spoke of how much she loved the short excerpts from Christian writer Emmet Fox that I had given her. It should be noted that Emmet Fox has written that the Bible is the most important manual ever written on how to think.

My Client reported that she would read a section about positive thinking and try to apply it to her current life… only to slip back, within a very short time, into the painful memories of her childhood and of her own child’s suicide. It was then that she said it… that thing that made me stop and think and that I have been thinking about ever since.

She said, “Lane, depression is harder to give up than smoking.” I was stunned by the idea because I had not heard it voiced so simply and because it seemed so true. The two “addictions” – an emotional state and a chemical substance – side by side in the same sentence. Since then, I have met other Clients who seemed as addicted to negative states of mind as alcoholics and addicts are to the substances that control them.

Dangerous Habits
Depression appears to me to be highly addictive. Like alcohol and drug abuse, it can be very patterned. To resort to an old adage, there are people who see life’s glass as being half-full, and there are people who see it as half-empty. Sometimes those people come from the same family. Usually, we find that they started thinking a certain way in childhood and have had difficulty breaking the habit and starting a new pattern. Among other things, these Clients tend to ignore happy occurrences while focusing on unhappy ones to reinforce their depressed point of view.

I also have Clients who seem addicted to their anger. That seems more understandable to me. Anger feels powerful, sometimes cathartic; it can seem filled with the possibility of revenge, and it can appear action-oriented. Some people prefer it to sadness which they associate with defeat.

Guilt and shame are long-term emotions that can be equally difficult to give up. Many of our habitual emotions are the product of our upbringing, so it takes a lot of practice to give them up – in much the same way that it takes time and effort to give up alcohol and drugs.

What We Don’t Yet Know
Several years ago, I attended a hospital lecture on brain chemicals (neurotransmitters) by a local psychiatrist. He said, among other things, that research had shown that depressed patients had serotonin levels that were lower than the control group of non-depressed patients. Serotonin is a brain chemical that enables us to feel happy, calm, and optimistic.

In the question and answer period following his lecture, I asked him if the patients’ serotonin levels had been lower than normal at birth – or if a lifetime of stress could have caused them to use up their “optimistic” brain chemicals. He said, “Good question. We don’t know the answer yet.”

Are we sometimes addicted to certain of our own brain chemicals? Are some people addicted to adrenalin, cortisol, or dopamine? Have we come to prefer those neurotransmitters to others that we are producing? Are these “addictions” related to our addictions to alcohol and drugs?

Stay Tuned…
Humor me. Until we know the answers to questions like these, let’s be pro-active in taking positive steps toward mental health:

Let’s think that we can overcome negatively patterned thinking and adopt positive thinking with time and practice. It won’t happen overnight, so let’s give it a chance.

Let’s practice daily to know what our thoughts are (Mindfulness) and to change them if they are not happy ones.

Let’s consider the possibility that when we participate in relaxing, calming, joyful behaviors, we are building up our supply of healthful brain chemicals. A healthful diet, an exercise program of your choice, choosing calm and loving friends, focusing on what is beautiful about today… all of these can help. The Dalai Lama and a group of neuroscientists and cognitive researchers at Emory University are teaching mindfulness meditation to test subjects with depression to determine if we can change their brain chemicals with meditation and the practice of compassion. They believe that they making headway.

Do you have too many sad or angry moods? If you do, do you know why? How long do you think this been going on? Do you suspect a pattern? Or is it a passing phase? Do you need to take charge of it and to change it? If you do, please come and see us. We have many ideas on how this can be accomplished.