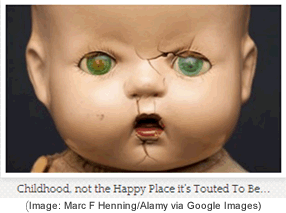 Case History: A Childhood Drama
Gia was raised by unhappy parents. They were unhappy as individuals and unhappy as husband and wife. Her father, a functioning alcoholic with a corporate job, had low self-esteem. He frequently humiliated his wife and children in order to bolster his sagging ego. His anger was constant and his sarcasm was caustic. As a child, Gia tried hard to please him, and part of that effort involved becoming like him.

Gia”s mother, a homemaker, tried to avoid the home to the extent that it was possible. She had many activities and traveled often to avoid her husband. Gia”s fear and anger at this perceived abandonment simmered constantly and exploded more and more frequently in tantrums that neither parent helped her to resolve. Her father may have fostered her resemblance to him. Her mother may have come to see Gia as simply one more reason to avoid being at home.

Adult Pain
The Childhood Drama is, more often than not, the initial source of our pain as adults. In an attempt to resolve it, to heal the wounds of childhood, we may act out our role in it again and again and ask others to play familiar roles in it — until we see what we are doing and stop it. Therapy is often the place where we learn to do that.

As an adult, Gia became my Client when she noticed a pattern in her relationships. She often chose men who were angry and who made her angry [like her father]. Usually, after a fight, her partner would go away somewhere to avoid the unpleasant aftermath [as Gia”s mother had done], making Gia feel abandoned and even angrier.

In therapy, Gia recognized the resemblance between her partners and her parents. She saw that she was playing out her childhood drama again and again, hoping against hope that it would end differently each time. When she admitted to herself what she was doing, it did end differently. She asked her fifth partner to attend couples therapy with her, and he did. Among other things, Gia stopped asking or expecting him to play the negative roles in her life that her parents had played in her childhood. She agreed to work on her issues and to allow her partner to do likewise. They are still together.

Who Raised You?
Do you have issues in significant relationships (intimate relationships, friendships, professional associations)? Is it time for you to look consciously at your childhood and at the characteristics of the people who raised you? This could include anyone who played a significant part in raising you — parents, grandparents, guardians, aunts or uncles. Everyone has a childhood drama, a recognizable dynamic or interchange that marked the childhood years and that helps to explain one”s current thoughts, expectations, beliefs, and behaviors.

Tell the Truth
Can you see any characteristics of your family of origin in your significant other, associates, or in the people you have chosen to be around you? If you need help understanding your childhood and its role in any current pain that you might be experiencing, here are some books that might help:

Family Secrets: The Journey to Self-Acceptance and Reunion by John Bradshaw

Legacy of the Heart: The Spiritual Advantages of a Painful Childhood by Wayne Muller

And for couples:
Conscious Loving: The Journey to Co-Commitment by Gay Hendricks
Getting the Love You Want by Harville Hendrix (there is also a workbook that you and your partner can use to work through family of origin issues and rebuild your connection).

The Last Act
If you will work to understand what happened to you during childhood, or if you and your partner will work together to understand the influence of both of your childhoods on the dynamics of your relationship, you may be amazed at the results. Understanding is the first step in creating loving, respectful, and conscious relationships.

Knowledge about your childhood and the patterns and expectations that you unconsciously acquired during that sensitive time can help you bring down the curtain on the childhood drama and attain peace and joy.