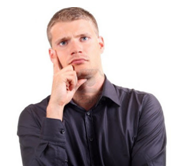 The Question Itself
It is an interesting question to many people for many different reasons. It is of interest to me because I am a therapist to numerous men. Don’t ask me why. I have no clue. I just am. Everyone is surprised by it. My friends never tire of making fun of me for being a specialist in “Men’s Issues”.

I am only asking the question because Freud asked it about women and also because of Shoshana Felman’s critical reprise of Freud’s question in an extraordinary book¹ about some of the considerations that might delimit a contemporary discussion of how women view themselves. I’m just trying to give men equal time.

For women who want to meet and talk to men, solving the problem of the Male Mystique is essential. If you cannot solve it, if you do not discover the answer to this eternal riddle, you might waste valuable time on inconsequential diversions like hair, makeup, and designer clothing. You should know from the start that these things are only of interest to women. Unless you are interested in attracting women, you should just forget about them.

If you are interested in spending time with men despite this caveat, you should probably learn something about them and how to communicate with them. Otherwise, you could be condemned to a life of glorious self-indulgence with friends, activities, travel, and your (male) cat. This could be a fate worse than death.

If you are a man, you don’t need to read any further since you yourself are the problem. If that sentence doesn’t make any sense to you, don’t blame me. I’m just copying Freud.

Things Guys Want
Most men do not want Armani clothing – or even know what it is. A considerable number of them build and tear down steel mills, behave obsessively about cars and trucks, think Yoga is a dairy product, and have a marked preference for killing their own food and cooking it on a grill called a Big Green Egg. A lot of people will tell you that men are only interested in sex and money. This is not true. They are also interested in cars, pro wrestling, video games, and football.

To meet them and talk to them, you must go where they go. Here are some suggestions. [I won’t be in any of these places to assist you. As I explained above, I’m not the type…]

Friday
If you place a high premium on communicating with this kind of man – and I obviously do for reasons of my job – there are things to keep in mind. When speaking with them, do not waste time on rhetoric – symbolism, figures of speech, or imagery. Keep the syntax very plain. Most of you are too young to remember Sergeant Joe Friday of Dragnet, a long-running police drama of the 1950s. Whenever anyone (usually the female victim of a crime) would try to explain what had happened at the crime scene or engage Sergeant Friday in any kind of dialog, he would say, with no expression whatsoever, “All we want are the facts.” Sergeant Friday is, in fact, frequently misquoted as saying, “Just the facts, Ma’am. Just the facts.”

When Clients come to my office for the first visit, after completing the paperwork, I usually start our session by asking, “What’s been going on?” or something like that. Women always respond immediately with a general synopsis of the issue at hand… My daughter is on drugs… I am unhappy in my marriage and considering divorce… I am always tired and stressed… I have been depressed since childhood…

When my Client is a man and I ask the same question, he invariably asks, “Do you mean why am I here?” Yes. That is EXACTLY what I mean.

Dudes
When men have a problem, they do not want you to over-empathize or to become excessively involved. This alarms them, causing them to glance nervously at the clock to see how many more minutes they have to talk to you, to back off, or to engage in defensive behaviors like stalling, blocking, minimizing, rationalizing, joking, or “stonewalling”. You must show them in minimalist language that you completely understand and that, although the situation is regrettable, you have seen this before (although I very much doubt that you have).

Examples of appropriate empathy:
I have not seen Harry J. for three and a half years. Then, suddenly, out of the blue, there he is, sitting in front of me. “Lane, I screwed up really bad. I’ve been having an affair, and Colleen found out.” I stare at him for one-half a minute, slowly shaking my head. Then I respond, with low-keyed emphasis, “…Dude… “. Harry “gets” that I have understood. We are on the same page.

Don G., or Cro-Magnon Man (as his wife calls him), had heart surgery subsequent to a dangerous health episode. A top-level personal trainer and weight lifter, he can no longer “clean and jerk” 500 pounds. His doctor has told him, frankly, that he will never again lift more than 350 pounds. He has lost weight during his recovery, and although some people find him even more handsome than he was at his Arnold Schwarzenegger weight, he is crushed.

There are tears in his eyes as he tells us, in couples therapy, that he cannot ever go to the “muscle gym” again. Part of his identity and, indeed, his very life are lost to him. His wife and I can see that he is devastated by this loss, and we quietly let him process it in session. It is not going to do any good to tell him that very few people can lift 350 pounds or, indeed, to ask him why anyone would want to do that. We simply listen. Then we sigh and shake our heads. We say, in unison, “Dude… ”

I make a note: when mourning is past, talk to him about life, human development, and his personal evolution – remind him about the Harley Davidson 1950 Panhead and its almost iconic status.

Funny, Helpful, Direct… Cool
In order to communicate well with men, you mostly have to like them. If you think that the planet that they come from (Mars, according to John Gray) is simply too, too distant, you may have trouble relating to them. It goes without saying that, if you did not have brothers or grow up with boys or work with men and you still want to talk to them, you may have to start investigating power tools and Harleys.