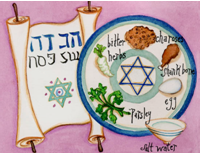 “Why Is It Different?”
Each year in early spring, many people of the Jewish and Christian traditions join together to commemorate the Israelites’ escape from the Babylonian Captivity and the miracles of their long and perilous journey to the Promised Land. Passover, or Pesach, is the yearly remembering of a people’s hard-won healing from trauma. As in most trauma cases, this healing is not, itself, without cost.

At the Passover Seder, or ritual meal, the youngest child might ask why this night and this dinner are different from all others. Why do we remember the trauma(s) of the Exodus again and again? Is it because trauma is always with us – even when “healed”? Is it because healing actually involves the telling and retelling of what Judith Herman, MD calls “the trauma story” until that story is no longer capable of incapacitating us?

As a therapist and, more particularly, a trauma specialist and suicidologist, I think that Passover can be especially meaningful to people of the Judeo-Christian traditions who seek healing for trauma.

Indeed, some of the elements of the Exodus and the Passover celebration that commemorates it are reminiscent of the therapeutic process for trauma survivors seeking liberation from intense and enduring pain.

Just as the firstborn of the Israelites were spared (“passed over”) during the deadly 10th Plague, it is important for my Clients to know that they, too, have already been saved. Sometimes they forget that.

Indeed, many people die each year from trauma, and my Clients are able to work so well in therapy because they are already the most radiant and resilient of survivors. Just remembering that can be a source of courage and inspiration for them.

The Israelites had no time to leaven the bread that they would take with them on the journey to Mt. Sinai. To remember this, part of the preparation for Passover involves the removal of all leavening agents and the foods that contain them from the house. Some rabbinical interpretations of the Biblical text point out that a similar removal of “leavening” takes place within our souls as well, as we release our own tendencies to be “puffed up” with ego, worldly appearances, and other false concerns.

This might happen in therapy as Clients prepare to recall essential, unremembered, and unspoken aspects of their lives. In preparation, they might spend time putting aside rationalization, pretense, denial, repression, displacement, humor/irony, and other defenses in order to gain an entirely different relationship with themselves. In so doing, they prepare to allow themselves to know their truth. Allow is a very important word in my practice. We do not ever force the memories of trauma.

A Path Through Parting Seas

Like the heart-stopping perils of the Biblical journey, for those who have suffered trauma, the progression from not-knowingness to personal truth can be arduous. As in Exodus, the trauma survivor’s odyssey is all the more strenuous in that, once begun, it is virtually impossible to retrace one’s footsteps and not follow through. In other words, healing may cease to be a desideratum and become an imperative. There may be great sadness and rage along the way; and although the trauma healing may not take 40 years, it may seem as though it does.

The answer to the question, “Why is it different?”, is the Haggadah. It is the telling and symbolic representation of the Exodus story: the enslavement of the Israelites by the Egyptian Pharaoh and their escape, led by Moses, to Mt. Sinai and, eventually, to the Land of Canaan. This story may have been told since as early as 170 C.E. There are over 2000 editions of it. And still it is told. It will be told until we do not need to remember it. In other words, until forever.

Similarly, the individual trauma story may be told many times – at the very least until it can be recounted without shock, horror, dissociation, or other post-traumatic symptoms. It might be verbal or in the form of a text. It is often done in therapy.

Narrative Therapy can be very useful for the treatment of trauma. Is it because becoming the author and/or subject of the trauma story is empowering for someone who might previously have see herself as a victim or object? Is it because writing enables her to create distance between past terror and the act of writing? Is it because you can confide everything to a text and then leave it on your desk and walk away from it – at least for a while?

The Land of Canaan

For the Israelites, the Land of Canaan was the land promised them by the Creator. For trauma survivors, the Promised Land lies within. It is an internal locus, a state of mind that, though filled with remembering, is free of grief, anger, flashbacks, and nightmares. In this hard-won, spiritual territory, one can often live for moments, hours, days, and, perhaps, even longer periods of being present to life and of living in peace.

At the end of Passover Seder, many people offer praise for blessings received. A great blessing of Passover may be, for some people, the knowledge that what has been endured can give hope to others. This is not only a blessing, however, but also a responsibility. According to Judith Herman, the final stage of trauma treatment is the survivor’s decision as to how the trauma will be used to bring about good, how it can serve to help others.

Some of my Clients were sexually abused as children or raped as adults. After treatment, they might share their understanding of trauma and the healing process with others. They might volunteer in a Rape Crisis Center or a Children’s Home. Those who have suffered harm because of their religion, culture, or gender might agree to speak or write of what they endured in order to educate others about the price that we all pay for a violent society.

Each time that we celebrate Passover or commemorate the Holocaust or reach the end of trauma treatment, we have an opportunity to ask ourselves, How can our knowledge help us to help others?

A principle message of Exodus is that it is the story of a community – the children of Israel, their leader, their Creator, and the Covenant that kept, and continues to keep, them together.

In keeping with this sense of community, a beautiful part of Passover is sharing this time with people that we love. Sometimes we think only in terms of our families and close friends, but I am asking you to think in terms of all people. I am asking you to be a member of a world community. I am asking you to remember as well that many people and entire nations have suffered, and are suffering, trauma. It is important for all of us to support one another in the healing process.

I want to wish all of our readers a Joyous Passover and to thank my Clients for their patience and courage.

3,964 thoughts on “The Spirit of Passover and the Healing of Trauma”